Quite a few years ago I started a pen pal group that was a huge hit. Everyone who signed up was placed in moderate sized groups where everyone shared their addresses, and then they sent each other postcards, cards, favorite recipes, and/or letters.

The only rule was that nothing else was allowed. The group was meant to be a low cost low stress way to connect with others in simple ways. A way to focus on spreading kindness while meeting new people and focusing on relationships away from social media.

It was so awesome to randomly receive mail from people all over the world with kind notes and hello’s. There were even two people that lived close to each other but had never met prior who ended up becoming really good friends! How awesome is that?!!

With the current situation and lack of real life connection, I thought it would be awesome to try opening up this group again! I think we could also use a more connection and less social media.

Would you like to join?? We’d love you have you! 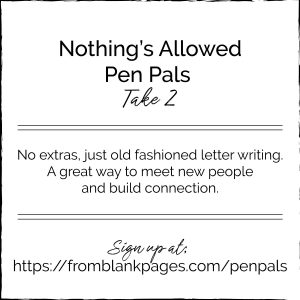 This site uses Akismet to reduce spam. Learn how your comment data is processed.

I used to think that I would never let my cat, if

I have a design wall!! 🤸‍♀️ And I receiv

I have so many different things in life that I am

I finally finished removing all the paper off the

A few of the Simple Star blocks I made. ⭐ I'll s

All images, text, and content on this site are the sole property of Diane Bohn and may not be reproduced, copied, derived, displayed, sold, republished, or transmitted without my permission. I reserve all exclusive rights.